This Loaded Baked Potato Dip has saved my butt more than once! In a two parent working household there are always work potlucks. I am the type that generally loves a work potluck because it means I get to make something either that my family doesn't love, or something that I will stuff my face with until it is all gone and feel guilty about it later (desserts am I right???).

My preference is always to make a dessert. I LOVE to bake. However, I always seem to get the potluck sign up list after the all the dessert spots are gone and making something hot usually isn't an option.

Hence, this Loaded Baked Potato Dip; it's great. I wouldn't even call it a back-up. It's great for numerous reasons. It's super fast to prepare. It makes a lot. The leftovers are super versatile. And, the kicker, you can make it ahead of time which is a working parent's dream. It lasts up to a week in the fridge, so you could make it the night before or even earlier depending on your schedule.

Loaded Bake Potato Dip is as flexible as it is popular!

It tends to be a crowd-pleaser. Want low it low carb? Serve it with vegetables. Celery is a particularly good choice. You could even cut the celery like you would ants-on-a-log, fill the stalks with dip and serve it more like a passed hors d'oeuvre.

Not worried about that, serve it with some sturdy chips. Potato chips of course being the most likely choice, we prefer Ruffle, because they have ridges.... It's a thick dip though, so make sure it warms up a little before serving, and put out some sort of serving spoon or cheese knife with it.

Now, maybe you need to serve a crowd and put out all of the dip, or maybe it's a smaller gathering your after. Either way if you have left over dip, it's a great way to dress up a baked potato. Want to get fancier? Use the dip to make a twice baked potato! You could also stuff jalapeños and grill them for a "healthier" jalapeno popper. Another idea, stuff and grill some turkey burgers. The possibilities are almost endless. 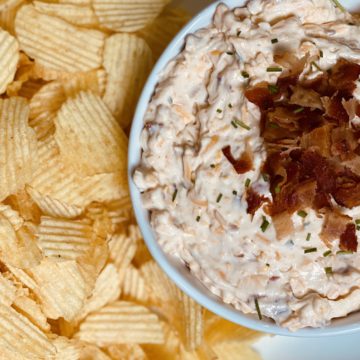 This dip has been a hit in our family since day one! We serve it with Ruffles, but you can use celery for a healthier version.
Print Pin Rate
Course: Appetizer
Cuisine: American
Keyword: Dip
Prep Time: 15 minutes
Rest: 1 hour
Total Time: 1 hour 15 minutes
Servings: 20 people
Calories: 123kcal

Nutritional data does not include chips.